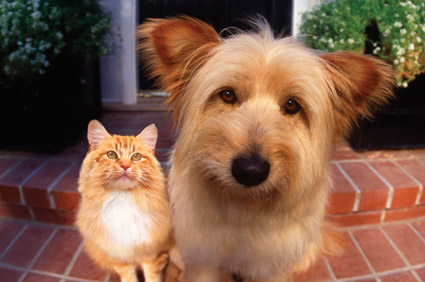 Thinking of getting a friend for your dog or cat? Tired of being more pet referee than pet owner? Read on for advice on keeping multiple pets under the same roof, without sending you through it!

Introducing a new pet to a resident pet should be done gradually. Keep the pets separated for several days to a week, allowing them each access to different rooms of your house at different times.

Dr. Bonnie V. Beaver, a professor at the College of Veterinary Medicine at Texas A&M; University, offers these suggestions for pet owners who want to introduce a new cat into a household that already contains one or more cats:

Helping a new dog get comfortable with another dog is a little different. Adult dogs that have had positive interactions with other dogs in the past will adapt easiest. When introducing dogs to each other:

If you are thinking about having both cats and dogs in your household, keep in mind that you may not be able to have a cat in the house if your dog is a hunting breed such as a beagle or foxhound. These breeds “do not do well with small moving critters,” cautions Dr. Beaver, and they may need extra training to get along with cats.

When introducing cats and dogs, follow the same steps for introducing a new cat to a resident cat. Praise the animals for positive interaction. Allow the cat to roam the house while the dog is confined on a leash or kept in a closed room. It is also a good idea to provide the new cat with a room of her own not only during the introductory period but also so it always has a place to escape the dog.

As with people, the likelihood of incompatibility and conflict among your pets increases with number. Some of the problems that can arise include a diminished bond with the owner and competition over attention or resources. However, according to Dr. Beaver, the worst conflict that can develop is aggression.

45% of U.S. households contain more than one pet.

The good news is that you can take steps to help your pets peacefully coexist. If they do show aggression toward each other, you might want to separate them. After a while, you can try bringing them together only when they eat so they associate a positive event (i.e., eating) with each other.

Here are some ideas for keeping multiple cats happy:

If you have both dogs and cats:

To prevent food-related aggression among dogs:

Should an actual fight break out between your pets, it is not usually a good idea to physically intervene. Instead, you can squirt them with a water bottle or can of air or distract them with loud noises. This will give you the chance to separate the pets.

Then, call your veterinarian. Says Dr. Beaver, “When you make an appointment, explain that you would like to spend some time talking about this problem. In most cases, the veterinarian will be able to help, or he or she can recommend an animal behavior specialist.”

You want your pets to share everything—except diseases. It is essential that you have any new pet you bring into your household examined by your veterinarian, vaccinated, and tested for communicable diseases, such as feline leukemia virus (FeLV) and feline immunodeficiency virus (FIV), and internal and external parasites. When appropriate, new pets not intended for breeding should also be spayed or neutered.

Health problems can alter interaction among pets. Dr. Beaver advises, “Any time you see a change in behavior, you should talk to your veterinarian to rule out any medical causes.”

Whether you have one pet or a small zoo, keeping your pets healthy will go a long way toward keeping your entire family—four-legged and two-legged—happy. 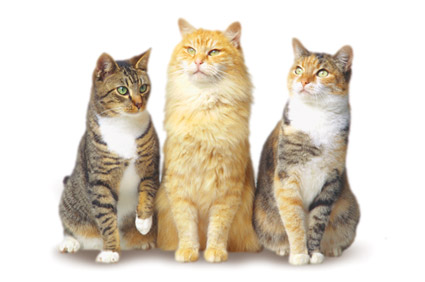 THE BENEFITS OF YOUTH

An older pet’s activity level and physical stimulation might be improved by the presence of a younger pet. However, monitoring the pet’s interaction with a new puppy or kitten is wise. Younger pets can perk up an older animal but can also stress them out. You can help by directing the younger animal’s energy elsewhere (for example, by spending ample play time with the younger pet) so that the older pet can rest.

WHO IS TOP DOG?

Whenever two or more dogs are together, the dogs will form a hierarchal group structure, with one dog in a leadership role. Most research suggests that you should respect the dominant dog’s position and not try to challenge it by siding with the underdog. Chances are, your dogs are happy in their roles. The dominant dog:

As the dominant dog gets older or when the younger one matures, their roles may reverse.