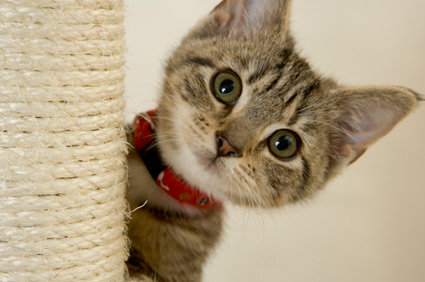 The first year of your kitten’s life will bring incredible changes to him physically, behaviorally, and socially. He begins life totally dependent on his mother. He is blind and deaf, and he can only crawl. But he will double his birth weight the first week, and by 2 weeks of age his eyes will open. Shorthaired kittens tend to open their eyes earlier than longhaired kittens. At first, all kittens have blue eyes, gradually changing to their adult color later.

By 3 weeks of age his ear canals will be completely open, and he can eliminate on his own. He even starts to purr. And he can hiss—sometimes even before his eyes are open!

Although you shouldn’t handle the kittens too much during the first week, as it can stress the queen, once their eyes are open they should be handled at least once a day to accustom them to people.

Between 3 and 4 weeks of age he goes from sitting up to standing and even tentatively walking. He may be able to climb out of his bed and into the litter box. His baby teeth are erupting, and he can eat some soft kitten food. He still prefers his mother’s milk, but over the next two weeks he will eat progressively more solid food. He is able to digest the kitten food, so if necessary can be fully weaned. Left with his mother, he will still nurse until he’s 8 to 10 weeks of age to satisfy his need to suckle.

He will probably need his first worming treatment by 3 to 4 weeks of age. Consult your veterinarian.

By 4 weeks of age he’s starting to play with his littermates and with objects like little toys and balls.

Kittens should be socialized with people by 6 weeks of age; after this age, it becomes more difficult. By 6 weeks, kittens are running and playing skillfully with their littermates as well as their human family. Between 7 and 14 weeks of age is the most active and playful time of a cat’s life.

By 7 weeks, you can start grooming practice, including bathing. By 8 weeks of age, he can have a topical flea treatment applied safely.

By 8 to 10 weeks of age, your kitten should receive his first vaccinations. The second injection is given three to four weeks later, with the last injection at around 12 to possibly 16 weeks of age.

By 12 weeks of age, he is ready to go to a new home. Even though he is weaned, ideally he should stay with his mother for at least 12 weeks, and even up to 16 weeks. His play continues to develop, as he pounces, climbs and pretends to hunt.

Around 4 months of age, his baby teeth begin to fall out, replaced by adult teeth. Your kitten should be spayed or neutered between 3 and 6 months of age. Both male and female kittens can become sexually active as early as 5 and even 4 months of age.

The next few months will see slighter but continued growth. He will become more self-assured, may want to wander farther if allowed, and will often become more independent and less obedient.

During this first year, your kitten has come from a baby to an adult, although he’s still developing in many ways. Many cats, especially larger ones, will continue to grow slightly well after reaching a year of age. You should have provided him with proper vaccinations, medical care, socialization, training, and play. This first year is a lot of work, but it’s even twice as much fun—and it sets the stage for the even better years to come!