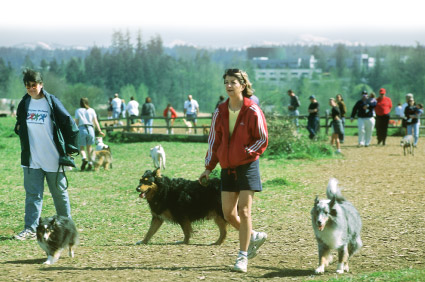 Tyler, an Australian shepherd, looks forward to his morning ritual as much as people savor their first sip of freshly brewed coffee.

“Okay, Tyler, it’s time. Ready to go to the dog park?” asks Anna Primavera, of Laguna Niguel, California, as she picks up his leash and her car keys.

Dog park. Those words have been magical to Tyler’s ears since he was six months old and he stepped into a dog park for the first time. He is now nearing his third birthday.

Anna keeps it magical by playing it safe. She has taught Tyler two important commands—“come” and “go to the bench”—to keep him out of any canine skirmishes. In addition, she brings his own supply of fresh water and a bowl to prevent him from lapping up any dirty water tainted with parasites or bacteria.

Dog parks are the canine version of coffee houses—places for dogs to pal around with canines of all sizes, unleash pent-up energy, and bolster the bond with their owners. When everyone follows the rules, these places can be heaven on Earth for dogs.

In fact, dog parks are popping up all over the country, offering a variety of amenities from baby powder–scented doggy bags and water fountains for people and dogs to lavish parks with agility obstacle courses, wading pools, and dog party celebrations. With more than 74 million dogs in American homes, the need for appropriate places for dogs to socialize continues to grow.

“Dog parks are great places for dogs to run and exercise off leash; however, there are a number of inherent risks when you turn loose a large number of dogs who don’t know each other,” says Alice Moon-Fanelli, PhD, a certified applied animal behaviorist who handles dog and cat concerns at the Animal Behavior Clinic at Tufts University in North Grafton, Massachusetts. “If the dogs do not have good recall (come when they are called) and owners are not paying attention, there is a serious risk of dogs getting into fights and being injured.”

She highly recommends that people taking their dogs to these parks understand canine body language so they can intervene before a growl exchange turns into a fight. She shares signs of a happy dog: relaxed body, smiling open mouth, performing play bows (lowering the front paws and arching the back end up high). An unsure or anxious dog tends to tuck in his tail, crouch low, and tightly shadow his owner. An aggressive dog is stiff in posture, leans forward on his paws, keeps his mouth tightly closed, or snarls and stares intently.

Jeff Werber, DVM, a veterinarian who operates a veterinary clinic in Los Angeles, sees far too many aftermaths of dog park melees. “Dogs are pack animals, so if two dogs start to fight, there is a tendency to have it turn into a six-dog pileup,” he says.

People must play their part, too, to ensure safety. High-pitched squeals can unintentionally increase a bully dog’s arousal. Speak in an upbeat, positive tone when interacting with dogs at the park. Pay attention to your dog, and never get between two fighting dogs or try to grab them by the collar—or you risk getting bitten.

“I recommend that people carry a pressurized citronella spray, which startles but doesn’t harm a dog,” says Dr. Moon-Fanelli. “You can also throw water on them or make a loud noise to startle them so they stop.”

Dr. Werber also advises against bringing your dog’s favorite toy or treat to the dog park. Your dog may become overly protective of these possessions.

Dr. Werber and Dr. Moon-Fanelli both emphasize that dog parks should not be training grounds for timid dogs or those known to be aggressive. “It is a dangerous misunderstanding that dog parks give more opportunities to socialize dogs who are aggressive toward other dogs,” Dr. Moon-Fanelli says. “These dogs need to be taken to professional dog trainers and animal behaviorists to work on curbing this behavior.”

Dr. Werber suggests that you size up the scene before you enter the dog park gates. If you see unruly dogs not being controlled by their owners, opt for a plan B—such as treating your dog to a long hike like he does for his four dogs: Millie, Grover, Herbie, and Pierce. “Sometimes we head up to Runyon Canyon, a long trail up a huge hill,” he says. “Once we get to the top, the dogs are allowed to go off-leash and run. It’s still quality time I can spend with them.”

Anna times her dog park visits for when Tyler’s best canine pals are present. “We’ve met nice people and nice dogs at the park, so we both look forward to our morning visits,” she says. “I can talk with the people I know while Tyler gets to hang out with his network of doggy friends. That’s what dog parks should be—fun, great environments for dogs.” 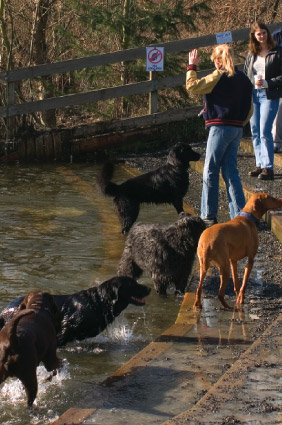 Dogs Should Rule at Dog Parks

People need to be on their best behavior at dog parks, too. Dr. Moon-Fanelli offers these tips:

Ask your veterinarian for advice on how you and your dog can get the most out of your trips to a dog park.