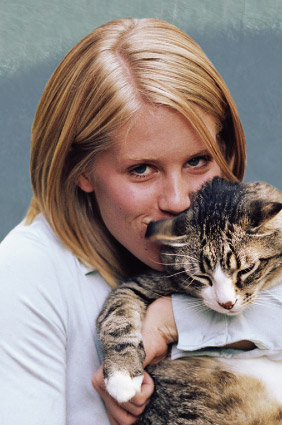 Seven years after her cat Cheyenne went missing from her Florida home, Pamela Edwards received an unexpected phone call: The cat had turned up at a shelter in San Francisco. The day was emotional for Pamela, who happened to get the good news right before she had to take her other cat to be euthanized. It’s unclear how Cheyenne ended up in California, but we know why Pamela got the call. The shelter where she’d adopted Cheyenne had microchipped the cat.

Five years after he disappeared from his owners’ home in Wickhambrook, England, a cat named Will has finally found his way home, thanks to the help of Cats Protection, the United Kingdom’s leading feline welfare organization. A Good Samaritan took Will to the organization, which placed him in their newsletter as their stray of the week. Incredibly, Will’s owners saw his photo and recognized him.

A two-year-old Russian blue cat named Napoleon managed to survive a car accident in Connecticut that killed his owner, Kimberly Pitts. Unfortunately, however, Napoleon disappeared from the area and wasn’t found until nearly seven weeks later. Emaciated and suffering from injuries sustained in the crash, the cat was taken to a veterinary hospital.The hospital scanned the cat for a microchip and identified his owner.Within hours, Kimberly’s brother,William, who had been searching for Napoleon, heard the good news.The cat is now recovering nicely.

A cat named Ted jumped out of a window in 1993 and was discovered 10 years later wandering about 13 miles from where his previous owner, Chris Inglis, used to live. A shelter located Chris through the ID code in the cat’s microchip, despite his contact information being out-of-date.

A 10-month-old cat named Gracie Mae somehow managed to slip unnoticed into her owner’s suitcase in Florida while he was packing his clothes for a trip.The cat wasn’t discovered by airport workers either, and she was loaded into the cargo hold of a plane.When the plane arrived in Texas, someone else mistakenly picked up her owner’s suitcase and took it—and Gracie May—home. As soon as the man unzipped the suitcase, the cat jumped out. Fortunately, she had on a collar with her owners’ information, so the surprised man was able to call the owners and make sure Gracie May made it safely back home.

Last year, one of the first pets in Victoria, Australia, to be microchipped was found and reunited with his original owner, Kerry Strauss. The cat, named Marmalade, had been missing for 11 years. He was healthy and had obviously been well cared for. Kerry was thrilled to see him again but said she would be willing to return Marmalade to the people who had taken care of him because she didn’t want another family to worry about their missing cat.